However, that would only happen if he manages to raise RM200,000 for 100 laptops in five days, with a countdown starting from December 26.

This effort is part of his programme, 1 Keluarga 1 Laptop, which aims to provide laptops for low-income families in Muar with children who need them for their studies.

He shared in a Facebook post, “As of this year, there have been more than 100 laptop units given to the recipients. Before the end of 2020, I aim to donate another 100 units of laptops to our brothers and sisters in need.”

A Message From The Crown Prince
This initiative might actually end sooner than expected after Tunku Mahkota Johor (TMJ), Tunku Ismail Idris gave Saddiq a generous donation of RM300,000.

This, however, came along with some feedback from the Crown Prince himself. He posted an Instagram story that said there’s, “No need to steal the rakyat’s money and no need to go bald.”

Tunku Mahkota Johor, Tunku Ismail Idris posted this on his Instagram story on December 28
While he gave no names, netizens had an inkling of who it was directed to. In response, however, Saddiq simply uploaded a video thanking the TMJ for his generous donation and how he along with the people of Muar are indebted to him.

Netizens Aren’t Too Happy Either
TMJ isn’t the only one with critique for this crowdfunding campaign though. Commenters on Facebook have also questioned Saddiq’s actions in asking for funding from the public.

One shared that the money to fund programmes like these should come from our paid taxes, and not extra money out of our own pockets.

Saddiq also had to clarify to a commenter that the #BotakChallenge was a way for him to keep the programme afloat after funding was cut by the government.

Others also questioned the amount of money he’s collecting, as RM2,000 for a laptop is a high amount and there are cheaper options in the market.

Back in October under the same campaign, Saddiq shared that each laptop he bought cost RM1,400 and was cheaper when bought in bulk.

He even requested for second-hand donations, which he explained to a commenter that he would still gladly accept.

Besides critique, he got plenty of praise too. But this isn’t the first time Saddiq is asking the public for help in fundraising initiatives.

For example, a couple of months ago, he raised over RM50,000 for the #TolongBantuMahasiswa fundraiser and was involved in other fundraising activities during his time as the Minister of Youth and Sports.

Saddiq has always been vocal about crowdfunding for political activities, but this is the first time he’s volunteering to go bald for it.

Though crowdfunding is a viable option to fulfil his promises to Malaysians, this brings up the concern of transparency.

The Public Needs To See A Transparent Breakdown
Based on the donation link provided in his #BotakChallenge posts, the public has no way of seeing a full picture of how much has been raised.

The number of funds gathered for campaigns would typically be exhibited in real-time on crowdfunding pages like GoFundMe, for instance.

With Saddiq’s link, Malaysians can only rely on Saddiq’s daily announcements on social media for the breakdown of his total donations, and take his word for it.

This lack of transparency can make many hesitant to donate, so a solution would be to move to more secure fundraising platforms that have a reputation for being trustworthy.

A Position Of Power Comes With Great Influence
All in all, it’s inspiring to see how quickly the money is being raised for these less fortunate families in Muar.

Whether or not it should’ve come from taxpayers’ money is a trivial debate in this matter, so long as 100% of the donations actually go to the promised community and we see the results of it.

At the end of the day, what’s important is that the people will be the ones who tangibly benefit from this #BotakChallenge initiative, not Saddiq or any other politician who does the same in the future. 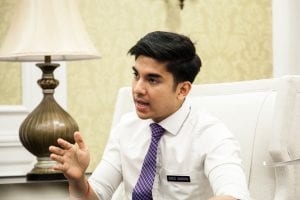